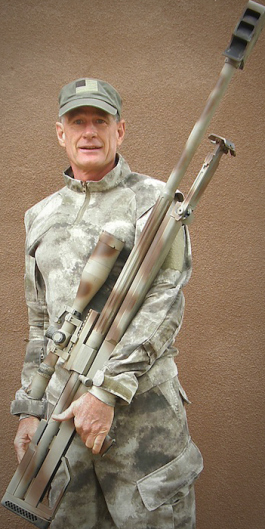 Speaking the same language. On all good successful teams one of the key elements is ease of communication. If every member is reading from the same book, speaking the same language, instructions and orders are accurate, quicker and much clearer. Anytime lengthy explanations are required, time is lost and many times something will be forgotten or misunderstood. Now let’s throw a team member into the operation that speaks a different language. Imagine having to translate every command given, under stress and on the clock. How effective is that going to be? So to me, no matter how good that member is, if I have to stop and translate everything to him, he is not going to be involved in any fast paced operations. Make sense?

In long range shooting, the best team is one made up of a shooter and spotter. Dividing the responsibilities takes the load off the shooter and allows them to focus on just putting the crosshairs where they need to be and applying proper marksmanship skills to get the hit. The communication between the team members, to be effective, needs to be short, precise and timely. So when holding or dialing wind, adjusting shots onto target, working multiple targets using hold over or under, both members need to be speaking the same language. This language is the unit of measure used in their optics. Namely the turret adjustments and reticle in both the rifle scope and the spotting scope.

During every precision rifle class I teach, one of the funniest moments in the classroom is the look onthe student’s faces when I tell them “Guess what, those of you that think or have been told that mils are centimeters and MOA is inches are wrong. Both are angular units of measure and whatever you put into the formula on one end, it spits out the same thing on the other. So those of you that have MOA turrets and mil reticles are going to have to work twice as hard as everyone else just to stay even”. So many shooters believe this is the case and won’t use mil turrets, as they think they are adjusted in centimeters. The other reason is MOA is “more precise than mils”. Now, that is in fact the case, but if you look at the numbers you have a standard called “close enough”. At 100 yards when adjusting your zero, if you have a MOA turret you can move the desired point of impact ¼” with the standard .25 MOA adjusting turrets. If you have a mil turret, that minimum adjustment is .36”. Do you know the difference between those two? The diameter of an 8d finishing nail. Now not the diameter of a Dremel tool bit shaft, that would be more than the difference. Really? You are going to put a guy on your team who speaks a different language for the shaft of an 8d nail? Seems to me you’re only “shafting” the team. Shooters not being aware of this fact are the reason we have a huge number of scopes out there with MOA turrets and Mil reticles.

The only time any linear unit of measure (inches or centimeters) means anything in shooting is when you are physically at the target measuring something. Inches or centimeters are not a unit of measure in any way at the firing position. The unit of measure on your scope is either MOA or Mils. So from the shooting position, talking in inches is speaking another language, which then takes translation for you or the other team member to use. From the shooting position, if the spotter or shooter can measure the angular distance that the group or shot needs to be adjusted in their scope reticle, there is no conversion and that can just be dialed right on the turret. This of course is provided that both the turret and reticle are in the same unit of measure.

At Gunsite in the Long Range Rifle (LRR) class, the two shining examples for the huge advantage of having everything speaking the same language are the holdover/under exercise and the spotter adjusting the shooter onto targets. We give the team two or more targets to engage quickly with just one turret setting. With one of the shots, the shooter will be holding center and with the others, either up or down. To determine this offset, the spotter looks at the ComeUp/DOPE for the target ranges, determines the difference between them and that determines the holdover/under for the engagement. However, if the reticle and the turret are in different units, the spotter now has to convert this into the other unit. Normally this is converting MOA to Mils. This of course is time consuming and anytime ones does math there is a chance for error.

The other example is with teams who don’t have reticles in their spotting scopes. I’m quite sure these teams have nightmares and our course no doubt drives up the demands for therapists. With no unit of measure to call wind accurately, the team members are both guessing at how far to hold and worse what the adjustment needs to be after a missed shot. Say the spotter calls the wind for the first shot as “Favor off the left edge”. Now for us, that is holding 1/4 of the target width off the left edge of the target. The first shot impacts just off the right edge. What is the spotters follow up call? One, he had to remember what he called( as opposed to holding the reticle on that point as a reference) and then add more distance to the hold in relation to target width. So we need to add just over half a target to the wind hold, so “Hold just under one target off the left edge” How much is a “just”? The ease of just saying “Left .5” on the first hold and “Left .8” on the second is driven home on every call that team hears the properly outfitted (reticle in the spotting scope) teams doing.

The importance of having everything in the same unit of measure, meaning speaking the same language, cannot be over stressed. Students that don’t believe this or were unaware when class started are always complete followers at class end. It makes no difference if they use MOA or Mils, as long as all three, turrets, rifle reticle and spotting scope reticle, are the same. No translation, no converting, no time lost, no math and most importantly, no guessing. Speak the same language.